Scanning Film With A Digital Camera

Scanning Film With A Digital Camera 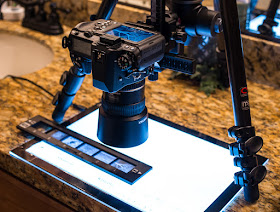 This article gives step-by-step instructions for scanning film with an Digital Camera.  Note that there are other options when it comes to scanning film.  An overview, with trade-offs, is provided here.

In summary, capturing film with a digital camera is very fast, cost-effective and delivers high quality.  The negative trade-offs are that it's an advanced technique that requires more skill than other methods - but these are skills you can build, if you have the motivation!

In order to capture the entire film frame, you'll want a macro lens.  Some properties to consider are 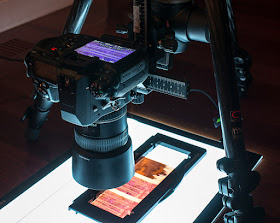 The camera is less important than the lens.  There are some considerations, however:


These are described together because they need to be complimentary.  The two main approaches are Horizontal mount and Vertical Mount.  Lets look at them in turn.

For this solution, you use a device that:

This system has the following trade-offs 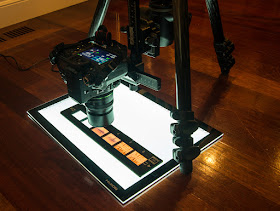 In this system, the lens sits on a light table and is photographed from overhead.  There are a variety of (vintage) stands that can be used for this.  You can also use a copy stand with an LCD panel (such as this one).  Finally, may be able to use your tripod with the column inverted.

The trade-offs are
In my situation, the additional flexibility of the vertical solution makes it more appealing.  I like how the vertical approach makes no assumptions about my film size, lens or camera and is thus is flexible to changes here - I like changing things :)

Note that my setup uses a Helicon light pad which cost me $40.   This pad works great for black and white but is not ideal for color.  The problem is that the most LED lighting is not broad-spectrum (with a low CRI).  It's missing deep reds, purples and some greens from it's "white" spectrum.  This limitation is no problem for black and white but can create color casting issues with color (which varies by camera and film combination).  For critical color work, you need to pay more attention to lighting.  I'm may write a separate article on that very subject.   In short, however, flash and daylight balanced incandescent work best for (artificially produced) accurate color.  If you are curious about a light source, you can get a spectrometer for $8 that will reveal big problems (but will not reveal the spectral "impulses" that fluorescent bulbs have).

In terms of holding the film, I use and recommend a Pacific Image 35mm film holder which can be bought for $13.  For my medium format film, I'm using a Lomography DigitalLIZA scanning mask.  The DigitalLIZA has a bit more film curl in the holder than I would like but the results I'm getting are still good. 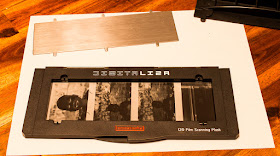 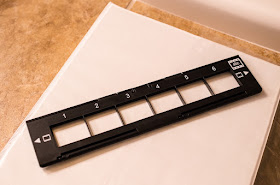 I should also note that my first 120 scans were with a holder I built from Legos.  This worked fine too (although I had a bit of vignetting on the edges) 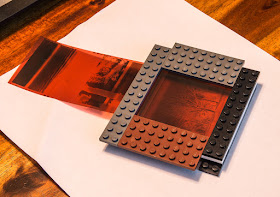 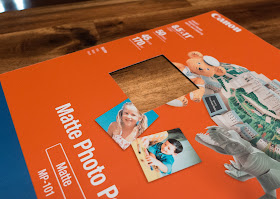 You might not need this, but if you are vertically scanning with a large light source, this might solve washed out images.  You place it over the light source to block out light pollution.  As you can see, nothing fancy is needed here.  I just use a piece of cardboard with a cutout. 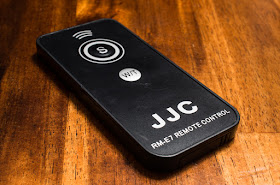 Once you get your camera setup perfectly, it's beneficial to keep your hands off it as much as possible to avoid any slight changes that might degrade focus.   A wireless remote assists this effort. 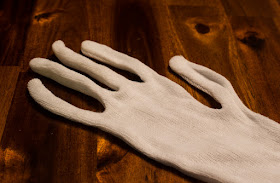 If you touch your film with your fingers, it will likely leave a fingerprint.  Not touching the film at all can make it a hassle to position film in it's holder.  A cloth glove is a good solution. 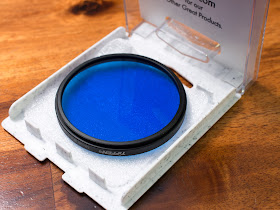 This is only useful when scanning color negative film.  It basically makes it possible to capture more signal in the blue channel, which is otherwise exposed less than ideal.  This allows the camera to capture more color total information in a single exposure.

Macro Rail (Tripod Use Only)


If scanning vertically using a tripod, a macro rail eases the alignment process.  You can get a cheap one that gets the job done for occasional work.  For more committed work, you might opt for a copy stand instead. 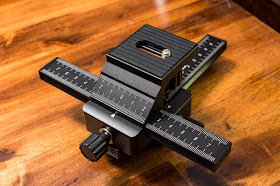 
This will depend on the system you are using.  Here I describe how I do vertical alignment.

Using a macro rail (for convenience), I carefully lower the camera all the way to the surface.

Next, I carefully loosen my tripod's ball head and macro rail, letting the camera hood rest flat on the surface.

Next, I tighten up the ball head and pull back the macro rail just a bit.  You can also do this with just the tripod column, but it will be a bit less convenient and precise.

Now check all around to make sure the gap is perfectly even, like this:


Finally, I continue to raise the lens until it's the correct distance to photograph the film. Again, a macro rail makes this easier but is not absolutely required.


Suggestion: If this is your first attempt, just capture one film frame per photo.

When you get more advanced, you can shoot larger film sizes (medium format and larger) as a grid of images, then use a panoramic stitching tool to make a very high resolution final result.  I have made 100+ megapixel images this way from 6x6 medium format frames this way (and there is detail still to be seen).  Typically, I'll stitch with a more pragmatic four shots for medium format, giving me about 36 MP for 6x6 and 56 MP for 6x9.  Lately, I've been going even faster by using a Pentax K3 ii with pixel shift enabled, giving a very clean 24MP result with little post effort.

If there is enough interest, I'll write a separate article on the details...


When loading the film, I shoot with emulsion side up to photograph the actual silver crystals.   If you shooting emulsion-down, the image will still probably be fine -  I tried it both ways as an experiment
and the practical difference I saw was somewhere between subtle and non-existent.


Initial focus is simply for framing and exposure.  Don't bother with preciseness as you'll want to wait until you've finished locking exposure first.

A good way to do this is to take photos and check the histogram.  RGB histograms are preferred because you can see each color channel separately.  When looking at a histogram, the goal is for all graphs  to fill as much of the graph as possible, without overloading it.

Technically, overloading it slightly to the right can be even better (as the RAW may still have latitude to spare), but this is a more advanced technique that varies between cameras - something to look into after you master the basics.

There is also the subject of the left side of the histogram.  If there is data against the left edge, your inverted images will have less highlight detail.  That said, if your histogram is touching both sides, you might have to choose between sacrificing something or going HDR.  If you are not sure, I would skip HDR, get as far to the right as you can -- you can always rescan later with more advanced methods if the first time does not deliver the results.

Another thing to note is the density of the frame you are scanning.  If you have some frames that are "Denser" due to more film exposure, then it may be good to tweak the digital exposure for those frames.


After exposure is set, we can fine focus, I recommend using live view with high magnification.  I also recommend manual focus.

Note that some digital cameras stop down the lens to simulate "live exposure".  You do not want this on and instead want the lens to be "wide open" during focusing.

With some cameras (including many Nikons), you'll actually need to focus with the aperture wide open (e.g. f/2.8), then leave live view to stop down (to f/8).

I recommend focusing roughly 1/3 of the way from any corner.  The film might be slightly curved in the holder, making the 1/3 point a reasonable middle ground.

When focusing, look for actual the silver grain crystals as your target.  The sharpness of the original image (that was captured by the film camera) is irrelevant in terms of a proper scan.

Another thing I do is go a bit past the focus point each way a couple of times.  This routine helps me get a "feel" for the ideal point as a "center" between going a bit far in each direction.  If you not sure about your critical focus, give it a try.

Once focused, it's best if you avoid touching your camera until you've done your shots (or as little as you can practically manage) 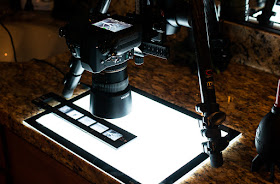 
The result below show a side-by-side comparison of my DSLR scans (left) verses a lab scan (right). 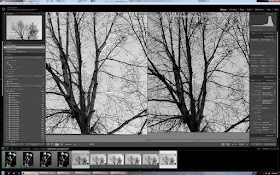 and here is a section of the same screen at 100% 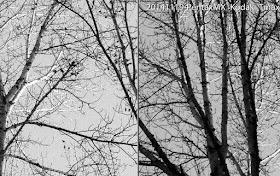 In this case, my DSLR has both more resolution and more tonal range than the lab scan.

I also have a dedicated film scanner (PrimeFilm XE) which is rated at 10,000 dpi and lab measured at about 3,500 ppi.  This means that the film scanner can do pixel-perfect 35mm scans at about 13 megapixels.  I have found my 16 MP DSLR does indeed slightly beat this resolution.  I've also used a 24 MP full frame D750 (and a 24 MP K3ii in pixel shift mode), and these widened the gap further.

One area where the film scanner does come ahead is in color accuracy with less effort.  That's a topic all in it's own.  I'll summarize here by saying that processing color scans made with a Digital camera is much trickier than B&W but that it's possible to get good results with some knowledge and effort (and a touch of luck).  Here is an example 6x6 medium format color scan (Kodak Ektar 100 film):